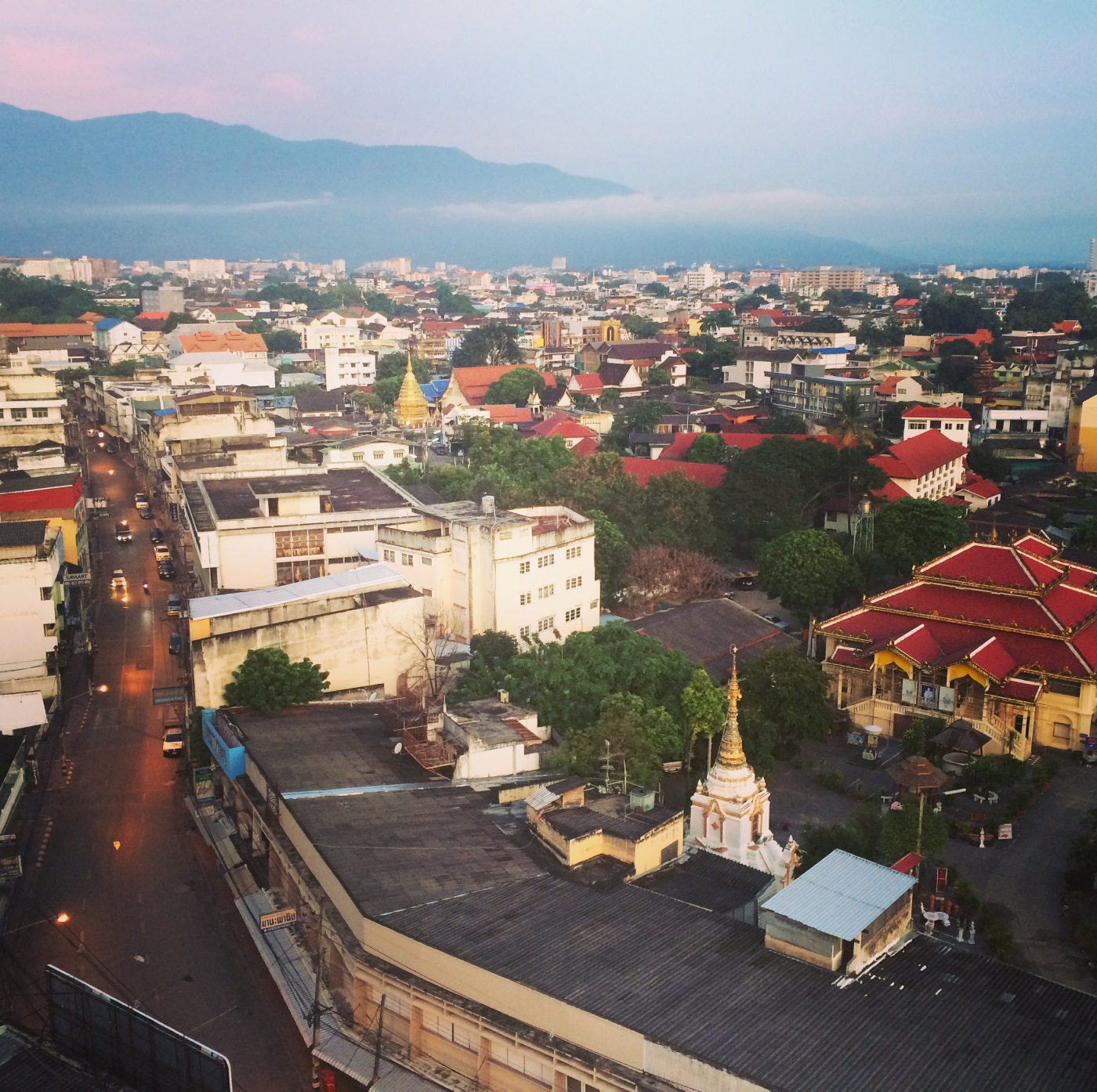 Have you ever noticed that as you’re about to leave a place, really good things happen? As I near the end of my stay in Chiang Mai again, and feeling ready for a change of scenery, I begin to notice, once again, everything awesome about this place.

I LOVE Chiang Mai. I have since the first day I walked down its tiny sois and found something delightful around every corner. I love that you can find virtually anything here, from a row of haberdasheries (how much do you love this word??) and textile shops in Chinatown, to some of the best cinnamon-raisin buns in the world (let alone the Far East!).

I love the funked-out tuk tuks that bomb around the streets mercilessly. During my dad’s visit late last year, we grabbed a ride from the airport in a tuk tuk for the Welcome-to-Thailand experience. As the driver zoomed us down the streets towards the old city, I noticed something moving in the darkened corner just above the driver’s head. As we reached our destination I had a better look. There sat two cockroaches, skittering around and nibbling on a stick of krolan (sticky rice stuffed in a bamboo tube). But they weren’t random critters. They were domesticated. A long piece of string encircled each neck (if we can say cockroaches have necks) like a leash, which was tethered to the frame of the tuk tuk. Without looking, the driver stretched his arm back, clutched one of the roaches in his hand, brought it to him, and stroked it. Those cockroaches were his pets. That was my dad’s intro to Thailand.

There are people and stories everywhere in this city. There’s something happening everyday, some celebration or holiday or reason to blast fireworks every other night, parade a marching band down a main drag on a random Tuesday, or to line the streets with hundreds of flower pots. There are traffic jams galore but I never see any accidents. There are cool, fresh mornings during the “winter” season, and hot sweltering afternoons that make standing under a waterfall a necessary part of your day.

But it’s a city, and as far as cities go, I don’t really like them. That’s what’s so strange about Chiang Mai. I love these stained, smelly, crowded streets where one can observe slices of fish hung out to dry in the sun like a t-shirt. I love it as much as I love a mountain. And I’m drawn to it, intrigued by it, not for the shops and the fact that you can get anything you want here, or for the celebrations, but for those daily interactions with the local people and misfit expats in the nothing-and-everything-has-changed neighbourhood that I stay in each year. This massive city has the feel of a community (which perplexes the crap out of my dad). I love it for the familiar sounds of the birds that deliver a multi-orgasmic warble (called koels), and for the skinny, slanted strip of light the sun casts on the curb of my little street every morning at 7:30. It’s a slice of promise for another beautiful, sunshiney, cloudless day. A never-ending summer.

And as I’m about to leave, a bit tired of city energy and pollution, all the good things begin to compound, which I think is most certainly a matter of perspective in a pressure cooker, but I believe it’s also the city’s way of calling me back every year before I’ve even left. It’s like being married for a long time. You’re familiar enough to acquire a long list of what you love and hate about your partner, and sometimes you wonder what life would be like if you were solo again or with a different person when you’re feeling a bit crowded or too familiar or things start getting stinky because you’ve reached the comfortable point where it’s acceptable to fart in front of each other. Then you realize that everything that makes you stay, that thing that draws you to that person again and again is precisely the combination of what you love and hate.

As much as I proclaim my distaste for living in a city, I also can’t seem to leave this one very easily. There are too many things that yell at me to stay, or take a short break, or come back in the future, but never ever to be done with it entirely. This city has given me so much that I am indebted to it for life.

Two years ago as I was leaving Chiang Mai after a five-month stay, I met Reid, my boyfriend (or partner as is probably a more age-appropriate term for the guy I happily choose to hang out with every day, and the only man I let see me naked). I met him just three weeks before I’d planned to leave Thailand and head to Sri Lanka. But I almost didn’t meet him because I wasn’t actually supposed to be having lunch where I had been that day.

This year, though slightly less rewarding, I discovered an electrical outlet with a ground hole hiding in my kitchen (because electrical outlets in South East Asia are never in sensible places)––the only one in my kitchen that can accommodate our toaster, which for the past few months, has sat on my sewing table on the other side of our apartment, far from the kitchen. That means for four months I could have avoided leaving a trail of breadcrumbs from our living area into our kitchen (an irritation I tried very hard to see as a charming feature of living in random places). Alas, I got to enjoy the convenience of having the toaster on the kitchen counter for a couple of weeks.

I also discovered Kasem Store, a tiny little shop housed just outside Chinatown and about five minutes walking from our apartment. It’s the kind of place that, should I get to choose the fate of my existence upon reincarnation, I come back as a Thai shop owner in Chiang Mai because they seem to be some of the sunniest people I’ve met. The wonderful thing about Kasem, aside from its delightful, spunky owners, is its main countertop brimming with fruit pies, chocolate brownies, carrot cake, turnovers, strawberry tarts, custard tarts, sugar-dusted doughnuts, and sticky sweet buns. They also have pork floss buns (but we won’t talk about dehydrated meat that dissolves on your tongue like cotton candy for obvious reasons). This place has been in my neighbourhood the whole time I’ve been here (and more––Kasem Store is a 50-year legacy).

That means for the past three years I’ve lived in Chiang Mai there have been a gazillion delicious ways to celebrate life, cope with stress, endure a breakup, collect cavities, shame my inherent gluttony, and drink my coffee lurking right around the corner from my home, and I never knew.

They also stock raw almonds, waffles and maple syrup, extra-dark chocolate, homemade yogurt, and crusty baguette. So, for the past month, I’ve been making up for lost time and visiting Kasem Store every other day or so. And I started to wonder about its history so I sat down with the store owners and asked them all about it. What they told me was such a delightful tale I decided to write it down and submit it for consideration in Chiang Mai’s local magazine. Let’s see. (If they don’t like it, you’ll find it here soon).

So long Chiang Mai, and thank you for the trail of breadcrumbs (and pie crumbs and tart crumbs and brownie crumbs) so I can always find my way back.

Photo: A 6 a.m. view from my bathroom window.