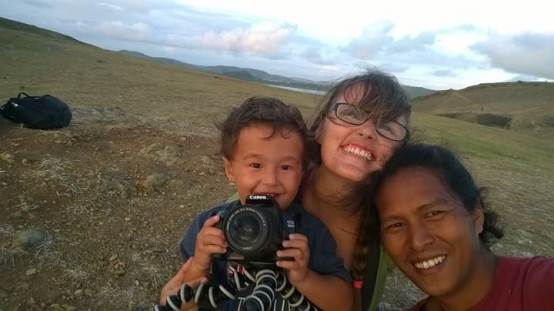 Recently, I decided that a great way to spend each birthday is to celebrate someone I aspire to be like. Someone with magic good-person dust, willing to sprinkle it into my needy, greedy palms. So on the eve of 38 (written four long years ago), I salute Ms Kerry and thank her, not just for coming into my life and showing me the way to Better Person-ness, but for lining that road with pink balloons, fuzzy finger puppets, colourful hobbit houses, and Kit Kat candy bars.

I met Kerry last year and she knocked my socks off. Well, she would have if I wore socks but Flip-Flop-Land doesn’t require them. She is the kind of person that inspires me to break grammar rules and inflate words simply by inserting the suffix -ness in order to deliver invented, albeit accurate terms to describe her character. She joined me in July at the start of my second year teaching at an international school in Surabaya, Indonesia. I figure she was my karmic deliverance for having made it through that swampy first year on my own, or for having not stepped on any ants in a past life. Kerry quite literally flapped her way into my heart in about five seconds. When she called me on her way to work one morning to ask for my help in locating her missing shoe under her desk I actually considered extending my contract another year, just to have more time in her company. To learn from her how to catch frogs and make entire villages out of paper maché. To unlearn all those adult behaviours that are supposed to make us more mature but actually just make us a bit dull, in favour of learning how to adorn life with a ridiculous number of rainbow sprinkles.

I was completely overwhelmed my first year, before Kerry saved me. I taught 250 students out of two campuses that were an hour’s drive from each other. I also planned extracurricular events that consumed hours of my personal time. An accurate image to represent the way I felt by the time the end of the year finally rolled around is of an old, scraggly cat that stuck its paw in an electrical socket and paid the obvious price. I think this is a symptom of first-year teacher syndrome?

When Kerry was going through the interview process with my boss I was asked to observe her teach a trial lesson to a group of my kindergarten students. I thought I had a pretty good thing going in regards to teaching style, teacher-student relationship development, and creative ideas for learning. And then I watched Kerry in action and it was a good thing I did because obviously, I had work to do. She stepped into my class with confidence, but not the sanctimonious kind. She was prepared, but not to the point of having a greater commitment to her lesson than to the children, and she completely followed their lead without losing control of the class. Most importantly, she was fun. The kids loved her, and anyone who has taught young children knows that they are a tough audience. Organization skills though… a beautiful mess. Upon her desk shamefully lies a massive pile of, well, everything, including lone shoes (I’m still unsure as to how shoes end up on desks). Tidy describes a schizophrenic’s brain before it describes Kerry’s workspace. But it’s an endearing tribute to the workings of her creative mind and a solid representation of her nutty professor-ness.

Kerry didn’t even study education or teaching, she got as good as she is through practice and and good ole’ fashioned motivation to just be a great teacher. Not even to earn a higher salary, promotion or recognition. She studied immunology in university, which actually makes a lot of sense once you get to know her. Kerry has lived in Surabaya for about six years, which for me, is something like a lifetime spent in the abode for the damned. She reported feeling “right at home” upon arrival in Surabaya when she was backpacking around the country years ago. Surabaya is not an easy place to live. Most people don’t even care to visit it, only using it as a base from which to get to Gunung Bromo. I won’t get into detailed descriptions about it’s cinder block appeal, but anyone who can immediately love that city must have a very special set of eyes and an immunity to the 10,000 irritating, frustrating, can’t-make-this-shit-up things that happen every day in that beautiful country.

Kerry’s intuition must have been full-tilt forward when she decided to stay because a few months into her arrival in Surabaya, she met a local man, an awesome guy named Mul, whom she married, and they had a little boy a few years ago who they named Oliver. Every weekend they go somewhere on an adventure. Spontaneously, they will hop in the car with several other family members and take off for the weekend, totally unplanned, usually ending up back home somewhere around 2 a.m. on a Monday morning with a good story. You think this would make her tired and irritable at work that day, but she’s as lively as one of the kids, engaging a tone of voice that should be illegal on Monday mornings.

One of my favourite things about Kerry is her amazing parenting. This is a woman who was born to be a mother. She often takes her son Oliver to a spot near the airport, and they spend an afternoon watching planes take off. (Note: such an activity would just depress me because I’m not on one of those planes). Then they go home and make airplanes out of sticks, and that sequence of activities can span their entire day.

She knows how to make the most ordinary things exciting. Lesson planning for Kerry is like an eight-year old’s trip to Disneyland. She does this thing which we’ve termed “flapping”. Some people express their enthusiasm through tone of voice or facial expression or irritating loud-laughing. Kerry flaps her hands like Peter Pan’s protege. I often slogged through lesson planning like I was just getting my laundry done. But then Kerry joined the early learning forces and incited me to love my job, to be thrilled teaching the fundamentals of English literacy to rich kids. I often received text bombs from her at 3:30 a.m. with ideas for the Christmas production we were planning together. And I never once found this irritating. This was, of course, because we planned a theatrical version of ‘How the Grinch Stole Christmas’–this was our job. The moment I mentioned the story as a potential play for the school-wide Christmas show, her propeller engaged and flapping turned into immediate orders for Who-sized styrofoam houses painted the colours of bubblegum balls, script-writing, and little sing-song text messages using violent and hysterical renditions of Dr. Seuss’s rhymes to describe her day at work. That was just to keep us perched on the platform of Christmas excitement to avoid falling into the bureaucratic bullshit that surrounds most education events. She was my comic relief my entire second year. She might also have saved me from drowning in a giant pit of bubbling despair just by having ears and a Mother-Theresa tolerance.

I know I’m making her sound a bit Mary Poppins or Sound of Music-ish but trust me, this woman can’t sing to save the lives of small, orphaned children, but bless her dearest, best attempts. Her singing was limited to our Offspring-inspired head-banging sing-alongs on drives home from work together which were cathartic releases of high-school nostalgia and teaching-induced nonsense. I jokingly call Kerry my Apollo because she often acts as my mentor in morality. I can always call on her to fish out my rational side or simply hand it to me when it doesn’t exist in a particular set of circumstances. Kerry has a way of recognising humanity’s inherent goodness without even realising it, that’s how unblemished by life she is. She finally decided to get her Indonesian driver’s license as consideration towards the country that allows her to stay without conditions, a country so corrupt they don’t enforce local driving licenses just so they can fine people for not having one.

Kerry is the kind of person who makes you realise how far you’ve come and how much further you’re capable of going, even when you’re already roughly halfway through life. She’s the kind of person you feel privileged to have in your life even if only to make you proud of your ability to effectively use file folders and desk drawers, stack paper neatly, and locate your shoes. But I would trade such skills for a bit more of Kerry’s Fun-and-Special Person-ness. My 37th year was all that more wonderful because of her.

One thought on “The People You Meet Abroad: Ms Kerry – Teacher Extraordinaire”