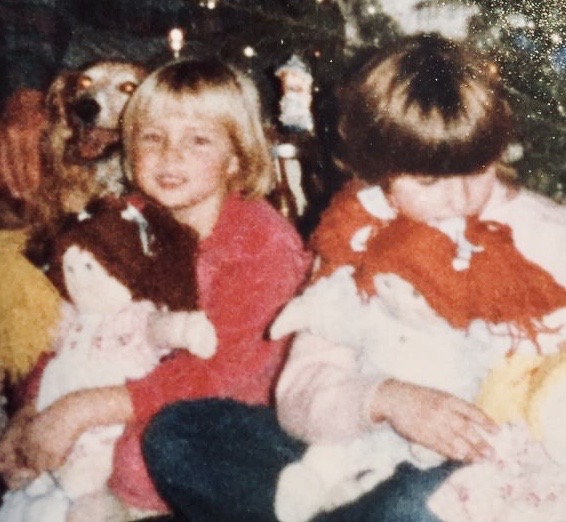 When I was eight years old, I wanted a Cabbage Patch Kid. Remember those dolls from the 1980s? They had soft squishy bodies with protruding belly buttons, hard plastic heads sprouting hair, and if you turned an unclothed one over, a name scrawled on the little butt cheek. The Cabbage Patch Kid community represented a variety of races, skin shades, hair types, eye colours, and names.

Along with every other child of my generation, I wanted one of these dolls desperately. I’d sit in front of the TV, one of those old-style boxy CRT televisions that sat on the floor like a piece of furniture, bewitched by the ads and envious of the kids at school who were lucky enough to acquire one of those dolls. Every day, one more of my classmates had one. Even the boys. I wonder if the Cabbage Patch Kid was instrumental in the growing acceptance of boys past a certain age having dolls. What age did it generally cease being acceptable for a boy to carry a doll around in that era?

While I slept, my eight-year old mind dreamed about those dolls. During my awake hours, I’d imagine what mine would look like and what her name would be. She had to be pretty and have a name like a sweet swirly lollipop, not anything like my oatmeal name. I wanted one of those dolls the way an old man loves a young woman––quietly, from a distance, still and certain. It was a secret, unrequited love. Wanting was something I innately felt was wrong back then. Well, not wrong, but to be kept tucked away from the eyes and ears of the one who ultimately grants our hearts’ greatest desires. If I wanted it badly enough, I might not get it. If I got it, it might be taken from me. I loved this yet-to-own doll so much that I already desperately feared losing her.

Fortunately, my mom was––and still is––not only a keen observer of the things people don’t say, she is also the maker of incredible works of sewing magic. She can make almost anything from a simple piece of fabric. As we grew from young children unburdened by vanity into self-concerned teenagers, my sisters and I asked her to turn blouses into pants, skirts into culottes, rainbows into Raggedy Ann-style overalls (or perhaps in those days, Andy was the only one permitted to wear pants). She made us swimsuits from the same bolt of fabric, which was nothing short of embarrassing from the perspective of a child. Completely endearing now though, through my adult eyes.

The Cabbage Patch Kid was expensive for those days. Most kids in my school, however, seemed to have one, except for those kids with grubby clothes who ate sloppy, white-bread sandwiches for lunch. I felt bad for those kids. They always had dirty fingernails and bad breath. They probably didn’t get to drink homemade root beer and build blanket forts in their living rooms. But then I wondered, maybe they also didn’t have to go to bed early or eat tuna fish casserole. I suspected I wasn’t going to get one of those dolls, even for a special occasion. My parents were far too thrifty, which I had a keen sense of, even then. But I never expected what came next.

Forgive me for not remembering the precise details of this significant life event I’m about to share. I remember feelings much better than events, which explains a lot, though an aside here––it presents a bit of a challenge to the self-examining adult who struggles to break useless behaviour patterns in her life! If I had to use one word to describe how I felt at the height of that significant life event? Shame. Shame in its purest and most pressing sense.

I think it was Christmastime because my sisters also received a gift wrapped in reindeer-patterned paper. My gift was tied with ribbon knotted so tightly it was like a stand-in for the requisite hard work––the dominant virtue of my parent’s generation––that earned you the right to receive a gift. But that makes my parents (or Santa) seem really hard-ass, which wasn’t the case. My mom simply enjoyed giving presents. My dad too, but the truth is that my mom did all the work of wrapping them (sorry, Dad).

That gift sat on my lap for a moment before I opened it with trembling hands. It was soft and squishy. It couldn’t possibly be a Cabbage Patch Kid, for they came in cardboard boxes with plastic fronts so you could see what kind of kid you were getting. Whatever was inside was not in a box. A tassel of brown yarn peeked out the top corner as I pulled back the paper. For a moment, I had no idea what it could be, until I did. I pulled the paper back further, a slow tear down the front for having far less patience to unstick the tape than the hesitancy I felt when I realized what was inside.

A Cabbage Patch Kid. But not the shiny designer ones perched on store shelves. A homespun version, my mom’s handiwork. I looked her over. Hair of brown yarn, tied up into two ponytails, pigtails as we called them, secured with white or blue ribbon. She had very short curly bangs. How did my mom manage to fashion straight yarn into curly doll bangs? It’s a good question, the answer to which only hands-on creative people are privy. She had blue eyes to match mine, a smattering of freckles, a pudgy little nose, and rosy cheeks. Chubby arms flanked either side of her doughy body, like a scarecrow. Her legs were long tubes of stuffed pantyhose pinched in at the knees.

I turned her over and flipped up her powder-blue skirt (naturally, she wore a skirt). Molly. It was scrawled right there on her peachy bum in my mother’s handwriting. The name there sealed my fate with this doll. My responsibility. My required gratitude branded right there on her cheek whether I wanted her or not. And I didn’t. She was absolutely darling (from the perspective of my then-future self) but the hard-hearted child in me wanted the real thing, not some sewn-up homemade version of it. She was right up there with homemade fruit leather and chocolate chip cookies when Fruit Roll-ups and Chips Ahoy were stealing the hearts and minds of the children of baby boomer homemakers.

The inner conflict inflamed my cheeks. My mom was so happy. I was so disappointed, in that uncomfortable egocentric childlike way that lacks tact. But I did understand in a sense, and I probably should have guessed that along with dresses, swimsuits, lunches, and anything else my talented mom could create, The Cabbage Patch Kid should also emerge from the skin and bones of her imagination. I don’t imagine that those grubby, white-bread-lunch kids had a mother like mine.

So why shame? Because my disappointment felt wrong. It meant I was ungrateful, spoiled even, not worthy of receiving such a gift that I knew many children would love to have. I knew enough that I shouldn’t reveal my disappointment for fear of hurting my mom’s feelings, so I didn’t. Instead, I settled into my fate. I made a pact with myself to love that doll because my mom had made her just for me. Because I was supposed to love this doll, and if I did what I was supposed to do then I would be a good person by my own standards of what comprises an acceptable human being.

Love is so tangled up, isn’t it? So beautifully complex. Something that is supposed to be pure and simple, like 100% Florida-squeezed orange juice, is this writhing, breathing conflict of emotion. Shoulds and shouldn’ts. Musts and mustn’ts. Yeses and nos. Yous and mes and wes and thems. Things like dolls and biscuits and rainy afternoon cups of tea and other people. It’s inside hate, disappointment, anger, fantasy, shame, the three-dimensional mirror in which we and every other phenomenon exist. In a simple Cabbage Patch Kid that pointed out how the things that used to matter never actually did. Their merit is in the humbling lessons they offer, should we accept them. Lessons that ease the longing that threatens to soil our lives with material concerns, throw-away romances, and superficial distractions that pervade our attention and steal our capacity to love.

My longing for one of those store-bought dolls dissolved. The commitment I made to love that doll evolved from a responsibility to a genuine appreciation and love for all of Molly’s homemade imperfections. Her slightly slanted knee, asymmetrical freckles, her frying-pan face, and knittable hair. In the end, she was beautiful. It didn’t matter that I didn’t get the doll I wanted, that one everyone else had, because the doll I got did its job, which was to be a doll for an eight-year-old girl learning about and leaning into the complexity of life and love the way only children can.

3 thoughts on “The Things That Used to Matter”