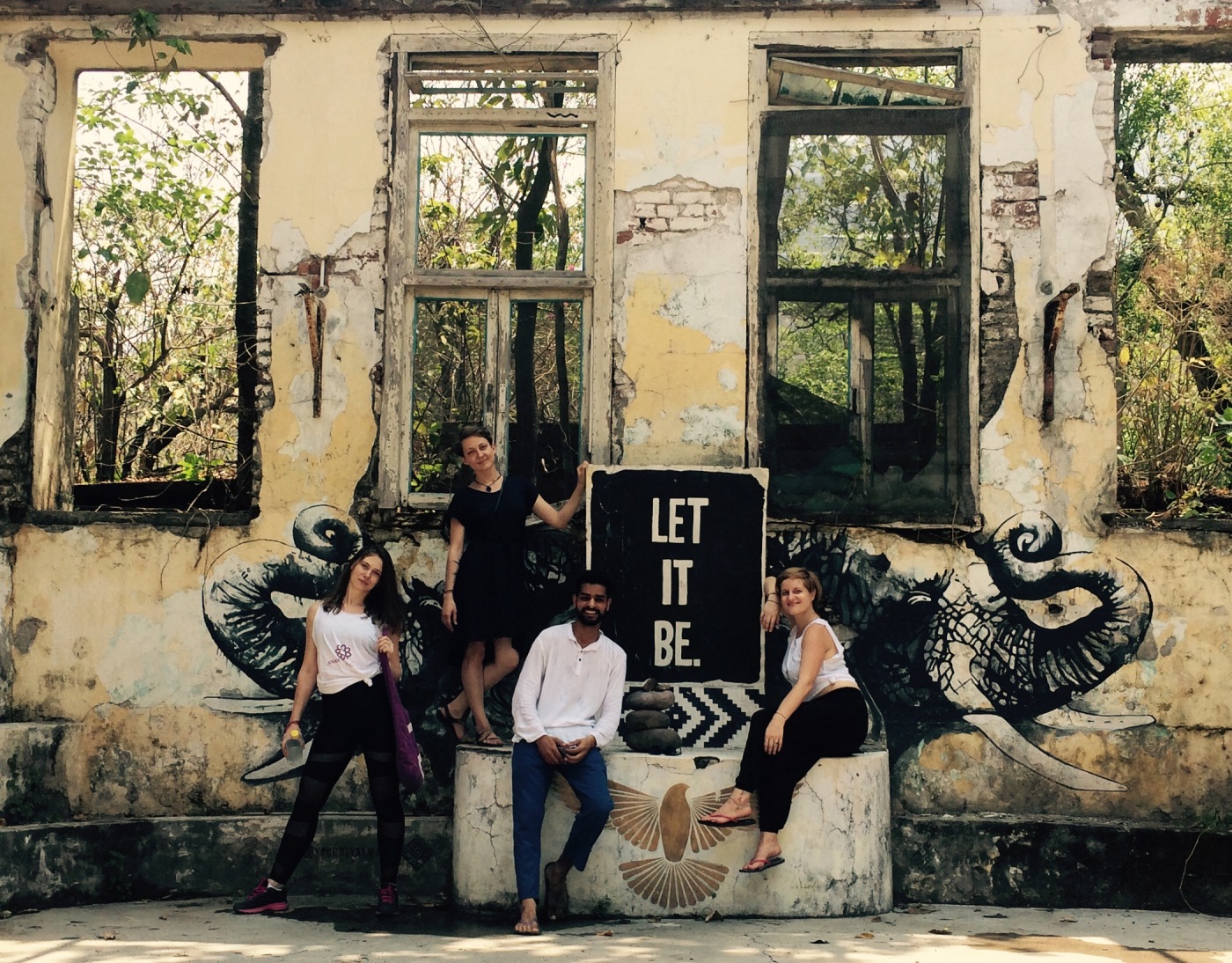 One of the first things I remember about planning to travel the world before I left to do so many years ago was mentally listing all of the things I was afraid of. They were numerous. Would drug smugglers hide illegal snuff in my backpack at the airport unbeknownst to me? Would hand-sized spiders eat me in my sleep? Would I be able to get by without knowing the local language? Would I get lost, alone, late at night? Would slick, tattooed, leathered men kidnap me and try to sell me on the human trafficking market (a fear immediately alleviated by my ex-husband who assured me such men are only interested in younger women–phew, one of the many benefits of aging!), would there be more than chicken’s feet, fried noodle, and deep fried unidentifiable sentient beings to eat on any given day? Could crunchy peanut butter still be a regular part of my life?

I was attached to material securities, as we all are, as we have been conditioned to be, as is absolutely necessary for living above ground most days. I was also attached to intangible securities, like security itself: knowing where I was going, how I was getting there, and what I would do once there. Well, a lot has changed in the past five years. I’ve gone through a massive metamorphosis in nearly every aspect of my life but I’ve become aware of one in particular lately. I started out travelling scared in a hypochondriac kind of way–I was actively searching for things to fear. Then I went through a period of disregarding all rules and cautions in the name of “freedom”, mistakenly defined but temporarily enjoyed as being able to do what I want whenever I want. Recently I’ve crossed a threshold into the land of rationally calculated caution, also known as growing up (wink wink). I’ve discovered that whilst having fun and feeling free and breaking the rules are still hardcore personal virtues, some things just aren’t work the risk anymore, especially when living a life on the road. This change is not owed to fear but to a conscious decision to live within certain boundaries in order to stay alive and feel good doing so.

Following are a few tips for staying healthy, safe, and aware, whether on a week-long holiday or a life-long jaunt abroad.

Eat the street food.
Different bacteria abound in South East Asia, sometimes they agree, sometimes they force innovative ways for releasing the contents of the stomach and the bowels simultaneously. Eventually the body adjusts but that takes time and astute food-seeking skills. Look for clean food places that use fresh rather than reused oil, and that keep perishables refrigerated. In Thailand, many street food stalls are labelled with “Clean Food, Good Taste” signs to ensure an acceptable standard of cleanliness and food preparation. Elsewhere, like in Indonesia, some warangs may serve tempe fried in oil with the unhealthy addition of plastic to make the soybean cake appear crispier and shiner. Scout out good, clean street food by hitting up the stalls that are busy, that keep perishables cold and covered, and always start with test-sized portions to ensure intestinal agreeability.

Keep hydrated.
The tropics will make you sweat a lot. Drinking three to five litres of water a day is recommended, particularly if you’re active, spend a lot of time in the sun, or drink alcohol. Sometimes rehydration salts are necessary. Recently I spent a month in northern India practicing yoga for four hours a day in 45 degree heat and three litres of plain water wasn’t cutting it so I added rehydration salts to my water and they made all the difference. Heat exhaustion and dehydration often begin with a headache, lethargy, and tight-feeling muscles. Don’t wait until you feel like shit. Start your day by drinking water and keep sipping throughout the day. Coconut water is also an excellent option. Some research suggests that it is actually more hydrating than water and an added bonus is that buying a fresh coconut instead of a water bottle cuts down on environmental waste.

Wear a helmet and sensible footwear when riding a motorbike.
I’ve spent plenty of days out on the open road with the wind in my hair and a pair of flimsy flip-flops on my feet. But it’s unwise, not because motorbike accidents CAN happen, they DO happen, especially in South East Asia where laws regarding road safety are looser than a pimp’s morals. I’ve seen feet turned shredded wheat from driving with sandals or worse, totally barefoot. Be careful with your helmet selection too. Especially in Vietnam, the helmets in South East Asia are often akin to a plastic bowl upon the head that slips back the minute you push 40 km/hour. Insist on a properly fitting helmet that covers your entire skull. And if one is not available, you can buy one for about $20, a small price to pay in exchange for head protection. Save the risky business for the bedroom or other travel adventures but don’t take any chances on a motorbike. There is a fine line between reckless negligence and freedom.

Be aware that robberies can happen anywhere, anytime.
Don’t carry everything with you, or walk alone late at night in an unfamiliar place. But don’t think that being out in the middle of the day is safe either. Robberies can happen anywhere at anytime. Is it safer to leave your things in your room locked up or to bring them with you? Depends on who you ask. I opted once to bring my valuable belongings with me out of fear that they may disappear from my room and I was robbed in broad daylight whilst driving on a main road. Take pre-cautions and always operate with a safety-first mindset. If something, somewhere, or someone doesn’t feel right, it’s probably not.

WATCH OUT FOR MANHOLES.
Two people I know have fallen into these street traps, which are sometimes covered haphazardly with unfixed concrete, and other times are wide open holes. Always watch where you’re going.

Travel with insurance.
There are tons of travel health insurance plans out there that have reasonable monthly and annual rates. Personally, I hate feeding these giant, cash-hungry corporations for a service I would never want to be in a situation to collect anyways, but it beats bleeding your entire life savings to a hospital should you get hurt.

Travel with cash.
Sounds counterintuitive but it’s about balancing risk with convenience. Travel with small amounts of different currencies, especially US dollars, enough that you are comfortable losing and don’t have to hit the ATM for the first couple of weeks. This will cover transportation, SIM cards, a few meals and nights of accommodation. If you’re travelling longer term, find a cheap banking plan to avoid or lessen international ATM charges. Most ATMs will ding you a few dollars for a small withdrawal and your own bank will also charge a fee.

Bring nutritional supplements and condoms.
If you’re concerned about getting adequate vitamins and minerals, many supplements are hugely overpriced in South East Asia so you’ll either pay a small fortune or risk feeling a little malnourished if you’re sketchy about available food options. Western meals abound in heavily touristed places and there is never a shortage of clean, healthy food, but you have to pay for it. As for the condoms? They’re like many of the market apparel–“free size”, meaning one size fits all. I think we all understand how problematic and sometimes disappointing a claim this is.

Check for understanding.
Ask the same question three different ways even if it makes you slightly uncomfortable or feel like a seemingly difficult person. And ask around the question too. If you want to know about the sky ask about the earth. Ask about everything related to your question to get a fully informed answer, especially if it is a serious matter like when dealing with the police or doctors. Information is not readily given. If you want to know something, you have to ask.

Take trusted taxis either by referral or otherwise.
An acquaintance of mine failed to ensure the taxi ride offered had legitimate signage. She ended up being robbed and sexually assaulted by the driver. Wait a little longer or pay a little more for personal safety.

Meet lots of people at an arm’s length.
I have had more problems with other travellers than with local people. Be selective about who you accept a ride from, go home with, or even just smile at. Trust that inner gut because intuition always knows first.

Keep your masturbatory activities private.
Once upon a time there existed a law in Indonesia that anyone caught masturbating was subject to decapitation. Although not the case anymore, you may have to give several years of your life to an Indonesian prison simply (sometimes necessarily) for beating the meat. But really, showing your stuff in public does not fare well in South East Asia. Whilst the beaches are acceptable places for bikinis and topless dudes, the street is certainly not. Know where you are and its social mores. Kuta Bali’s reputation is not synonymous with Balinese or Indonesian culture and its acceptable modes of behaviour. Fully tattooed breasts are not a stand in for a bikini top!

Have fun but don’t confuse it with ignorance.
Travelling around South East Asia sometimes feels like being a kid in a giant, unexplored playground, but danger lurks in unusual places. Be aware that there are plenty of unknown dangers in an unfamiliar place, whether they are actual physical dangers, such as venomous creatures, or socio-cultural dangers, like showing anger in public. Be aware of where you are by observing the environment, acting consciously, and reading the local news. Limit your use of plastic, your accumulation of trash, and your use of water. And don’t put toilet paper in the toilet because the septic systems can’t handle it, and please don’t be a littler bug.

Enjoy freedom but avoid reckless behaviour.
I see many Westerners, people from First World countries doing things that are socially unacceptable at home or downright against the law. You don’t have to go as far as you can go because there are no laws in place.

Let it be.
A contradictory statement of advice to sum up this list of cautions? Not really. Shit happens even if we’re as careful as can be. One of the most useful mantras I carry with me has actually served to remind me that the world is not as scary as we think it is. Dangers, bacteria, manholes, and assholes exist everywhere. So do politically incorrect terms and honest people. Don’t not go somewhere because the water is dirty, or the traffic is scary, or because the news warns of flesh-eating butterflies. Being aware is one of the most important behaviours you can practice whilst travelling. Know what’s important to you and let the other stuff be. Weigh possible consequences with fun and social responsibility to determine if certain actions or inactions are worth the risk. If something bad happens, reflect, learn, and move on.

2 thoughts on “How to stay healthy, safe and aware when travelling abroad”